German Shepherd with Floppy Ears: Everything You Need To Know!

One of the distinctive features of the German Shepherd is its Pointy Years, so what if your GSD’s ears aren’t pointy?

Should you be worried?

No! In fact all the German Shepherds are born with floppy ears and only when they are around 4 to 5 months old, you can start to see their ears perking up.

But what if it’s still the same even after 5 months, if your GSD’s ears are floppy even after 5 to 8 months then it’s time to take action.

In this article we’ll let you know everything about the German Shepherds with floppy ears , from how it occurs to how to get rid of it.

Why Are My German Shepherd’s Ears Floppy? 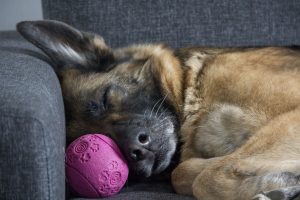 As you probably know, all German shepherds are born with floppy ears.

This is because their ears contain cartilage that’s intended to support their ears and help them maintain their characteristic pointy shape. It’s just like the cartilage that humans have in our outer ears.

When German shepherd puppies are first born, however, this cartilage hasn’t fully developed yet and doesn’t have the strength to support the puppy’s ear, so the ears hang limply around the puppy’s head instead of always being perked up.

In general, it takes about five to eight months for a German shepherd puppy’s ears to straighten out on their own. During that time, the ears will usually perk up a little bit and then fall back down, and this process might even repeat itself a few times.

You may also notice that after a certain point your puppy might have one ear sticking up and one ear remaining completely floppy.

This is also totally normal and not any sort of cause for alarm. The cartilage in each ear doesn’t always develop at the same rate, so just give it more time and you’ll be sure to see the second ear perk up eventually too.

In general, the straightening of the ears tends to coincide with the end of your German shepherd’s teething period.

However, even after waiting for eight months or more, your German shepherd’s ears might still be floppy. Again, this is a fairly common issue but not a very serious one. In fact, something like one in five German shepherds will never develop pointy ears.

There are a few reasons that can cause your German shepherd to never develop pointy ears. Here, we’ll take a look at some of the more common ones.

So how do German shepherds end up with the floppy ear gene? In most cases, it’s likely due to the breeder you got the dog from.

Breeders will sometimes breed German shepherds to have the biggest ears possible, because big, pointy ears do look good, especially on show dogs.

However, if the breeder breeds a German shepherd with ears that are too big, the cartilage will never be able to develop to the point where it can support the weight of the ears.

If you can, try and meet the parents of the puppy you want to buy. By looking at them, you’ll probably be able to get an idea of how your puppy will turn out when it gets older.

Look and see if the parents have smaller ears, smaller heads, and thicker cartilage in their ears. If they have all of these things, it’s a safe bet that your puppy’s ears will develop normally.

Before your puppy’s ears fully develop, they’re a lot more

susceptible to injury. Other than genetics, trauma is probably the most common cause of floppy ears on German shepherds.

There are many ways a German shepherd puppy can damage the cartilage in their ears.

It can happen if your puppy likes to rough-house with other puppies because there’s a good chance your puppy will get his ears nipped or tugged on.

If the injury hurts enough, your puppy could even develop a habit of keeping its ears down, as a way of protecting them from further injury.

Your puppy can also injure its ears if it happens to go to sleep next to a hard object. If the ear gets wedged between the puppy’s head and the object, that can potentially cause injury.

Just like a growing human, a growing German shepherd puppy needs to eat a variety of essential nutrients early in their life if they want to develop properly.

A puppy needs calcium and vitamin D in particular because those are vital to the proper development of bone and cartilage.

When you first get your German shepherd, the first thing you should do is take them to the vet.

The vet will be able to help you assess your dog’s nutritional needs and help you pick the best food for your dog. They’ll also be able to give you any other health information you might need to know.

Dogs can’t really clean inside their own ears, so dirt and gunk can tend to build up. An excess of dirt alone can prevent the cartilage in your German shepherd’s ears from developing normally.

If you go for a long time without cleaning your German shepherd’s ears, it can potentially lead to an ear infection. If untreated, an ear infection will get progressively worse over time, so you really don’t want to let this happen.

How to Deal with Your German Shepherd’s Floppy Ears

If it’s been over eight months and your German shepherd’s ears still aren’t standing upright at all, then this is an indication that there might be some kind of problem.

At this point, you can start taking steps to fix their ears if you want.

However, unless your German shepherd’s floppy ears are being caused by some sort of serious medical issue, you don’t have an obligation to try and fix them.

Floppy ears on their own don’t cause your German shepherd to suffer at all, nor do they cause any sort of hearing issues.

If you just want your German shepherd’s ears to stand up for aesthetic reasons, there are a few things you can do to help this happen.

Give Them Lots Of Chew Toys

This is one of the most important things you can do for your puppy to help them develop pointy ears later in life.

This is less of a treatment method for floppy ears, and more of a preventative measure.

Puppies need chew toys because it helps them relieve some of the pain and discomfort they get when they’re teething, but it also helps them develop some of the vital muscles in their head, neck, and jaw.

In particular, dogs have an extremely developed temporalis muscle. This muscle is located on both sides of your dog’s skull, and it’s one of the most crucial muscles for chewing that dogs need. The temporalis also helps keep your dog’s ears in the upright position.

Your German shepherd needs muscles as well as cartilage to help keep their ears pointed up, so make sure you always have plenty of chew toys on hand!

If your puppy has reached the point where it should have pointy ears yet doesn’t, you can try using the tape method. The tape method has been used by many German shepherds owners over the years, and it’s safe for your German shepherd as well as being easy to do.

Essentially, what you’re doing is taping your German shepherd’s ears in place for periods, with the goal of eventually allowing the ears to stand up on their own.

You’ll need a few different materials to make this work, which includes foam rollers, tape, and Popsicle sticks. The foam rollers need to be small enough to fit in your dog’s ears. And make sure to use paper tape and not duct tape!

Once you have all of the requisite materials, here are the steps you need to take:

If your German shepherd reaches the age of nine months and their ears still haven’t perked up even after taping them, then at this point they probably won’t ever perk up. You can stop taping their ears if you get to this point.

It’s not always a medical issue that can cause your dog to develop floppy ears. Occasionally, your German shepherd’s mental state can affect whether or not they hold their ears up.

Sometimes, your German shepherd just won’t feel like holding their ears up at all even if there’s nothing wrong with their ears.

When this happens, you can try and use conditioning to get your German shepherd more comfortable with keeping their ears up. To do this, you’ll need to get a clicker for dog training.

Once you have the clicker, make sure you always keep it handy, along with plenty of treats. Any time you see your dog perk their ears up for any reason, immediately click the clicker and give them a treat or two.

It will probably take some time for this method to work, but if you keep this up, eventually your German shepherd will get way more comfortable keeping their ears up. They may even start perking their ears up just from you clicking the clicker!

It goes without saying but making sure your German shepherd has a balanced diet during their growing years is incredibly important.

Making sure your German shepherd is getting enough vitamin C is perhaps the most important thing you can do to help the cartilage in their ears develop normally.

Make sure you cut the fruits and veggies up into small pieces before feeding them to your German shepherd and prepare your veggies first by either steaming or blending them. Also, make sure to remove the seeds from any fruits or veggies you give to your dogs. 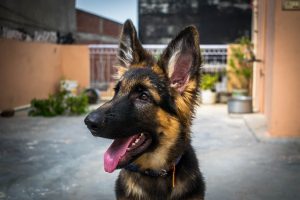 If your German shepherd has floppy ears, for the most part, there’s no need to worry. In most cases, it’s just because of a minor genetic defect, and there won’t be anything you can do about it anyway.

In other cases, floppy ears are indicative of a more serious condition, and you should deal with whatever that is first before you worry about fixing your German shepherd’s ears. 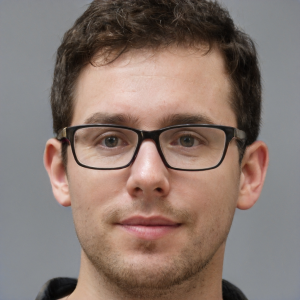 Thomas
Thomas M. Villalpando is the main author of IPet Guides. He spends his time reading, training, and working with several Dogs' behaviors. You can find more about him here.